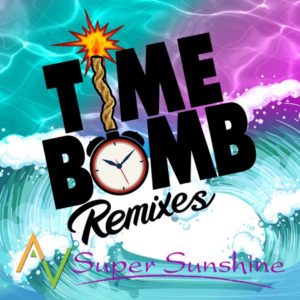 Club music has changed a lot in the last four decades. When we break down the timeline of electronica dating back to its earliest roots in the discotheques of the 1970s all the way to present day artists like AV Super Sunshine, whose song “Time Bomb” gets a fascinating remix stylized and intended specifically for club play this summer, we are able to come to a couple of really important conclusions about the genre as a whole. For one, electronica is never going away, it’s only going to get bigger and more popular. And perhaps even more importantly, electronica isn’t going to stand still but rather constantly advance, and artists like AV are living proof of this fact.

AV Super Sunshine doesn’t just want to make us dance; he wants to makes us think about the very reasons why we love to dance in the first place. Bodies in motion generating heat together, creating an unseen chemistry that binds us and can even result in the conception of another human life. AV taps into this in his club remix of “Time Bomb” and amplifies the conversation into layer after layer of pure sonic bliss. In other words, he uses the studio as a tool of divine intervention.

Music can be a beacon of hope in dark days of depression and loneliness, and AV Super Sunshine has been through enough pain and trauma in his life to understand just how important his medium is to keeping the peace and sanity of the world. A survivor and not a victim of strife, AV puts all of his passion and emotions, no matter what they may be, into his music, and his attention to detail really shows up in everything he records. I’ve been following his work for a hot minute, and I must say that this latest batch of remixes could be his finest hour yet.
“Time Bomb” as a club track has a unique crossover appeal to rock music fans, and that’s something that I haven’t really been able to say about any electronica track since at least the late 1990s when industrial music briefly broke into the mainstream (only to self-destruct when left to the devices of commercial integers). AV Super Sunshine is a rockstar of the EDM world, but he swings like a Rolling Stone in this track with more ferocity than we’ve seen from him before. Could this be a hint at what future compositional experiments are to come? I really hope so.

As cinematic as “Time Bomb” is, it’s still relatively simple and to the point, which is a design that pop music is really desperate for right now. Everything is getting over the top in music right now in all the wrong ways, and despite the fact that AV Super Sunshine makes music that is bursting at the seams with color and exhilaration, he knows where to draw the line, and his restraint is worth commending. To take a page from AV’s playbook, I won’t waste any more time selling you on how amazing his work is; I’ll just tell you to go out and snag a copy of his latest release as soon as possible.