THE AMERICAN RELICS are a new band comprised of world-class musicians that have come together to share in the experience of particular related musical concepts, which are: to bring by way of original music the sounds and feel of not only wonderful music eras gone by, but new music created with the analog-sounding, melodic and production values that so many music listeners miss nowadays. The American Relics are the past, present and future of the music world.

“The best and most extraordinary artists will be those who every hour snatch the tatters of their bodies out of frenzy cataract of life, who, with bleeding hands and hearts hold fast to the intelligence of the time”…Richard Huelsenbeck

Check out THE AMERICAN RELICS at www.theamericanrelics.com

THE AMERICAN RELICS masterminded by John Gitano are a unique band who keeps nostalgia in check with echoes of the past while creating and integrating the sounds of today’s music’s hottest mixes. 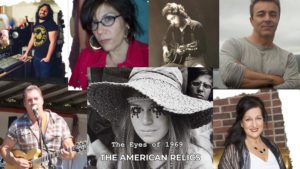 Lead singer, guitarist and main songwriter John Gitano considers himself fortunate to have been around the music of the 60s. Having written a barrage of songs (probably in the thousands), he considers his band “ an ensemble of musicians that have come together to share in the experience of particular related music concepts, which are playing music with great influences of melody, analytic sounding recording production, harmony, and other influences from specifically the 1960s – 70s era, as well as other eras.” The other musicians in the band have projects of their own and have all contributed to the past, present, and future.

Adrienne Dugger, is an amazing vocalist that has been involved in the world of opera, and has toured for 25 years all over the planet and performed as lead soprano in many different roles. Some of her credits include lead soprano at the New York Metropolitan Opera, and the acclaimed Bayreuther Festival in Germany. She is a huge fan of rock ‘n’ roll history and a multi octave talent who contributes much to the band.

Other members include Nelson Montana who is a multi-instrumentalist and produces, arranges, performs and teaches his craft. He has worked with artists including Nile Rodgers, Kim Sozzi, Bo Diddly, and many others. Ian Zane on bass has worked with artists including John Dawson of The New Riders of the Purple Sage, and Jerry Garcia from The Grateful Dead. Josh Salant has great knowledge of sound engineering and music and Joni is a keyboardist and has both affiliations with Bleecker St., Cinema in Greenwich Village as well as a country music band that she is part of.

THE AMERICAN RELICS in essence are a supergroup with the best of the best in musicians with some of the most authentic and truthful songs of yesterday which they have catapulted into today and into the future. John Gitano has a way of using innocence and vulnerability within his lyrics. The lyrics are open for wounding, but also for pleasure. It is difficult to have ideas and very hard to put yourself out there however THE AMERICAN RELICS succeed with flying colors…..

American Rapper and actor Dave East has just joined the new fan engagement platform Fanmire to directly engage with his fanbase. With over 6 million followers around the world, Fanmire is a streamlined opportunity for […]

Hidden somewhere between the New England region and depths of horror lurks masterful author and playwright, Howard Odentz who is quickly gaining extreme popularity in the world of terror and fear, in the most exciting […]