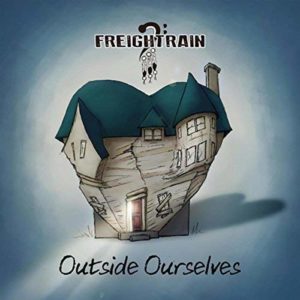 Freightrain’s Outside Ourselves is a full-length album driven by the stylings of frontman Robert Parker and made up of nine different songs, each one of which is arguably as evocative and beautifully realized as the next. Beyond its illustrious surface cosmetics, however, lies a record that beckons us closer with every listen, enhances our grasp of Parker’s bold tonality, and lends tremendously to concepts of postmodernity in contemporary music. You see, though nine individualized tracks comprise Outside Ourselves, the album itself has a singular narrative. That narrative is expressionism, at the most organic, unclouded level possible. In “Better Man,” that expression comes to us in the form of a petulant, resisting groove propelled by an equally angsty guitar part. The title track employs dissonance in a nonconventional way, using it to define a cushy melody that is anything but chaotic. “I Still Believe” and “You Found Me” might sit on opposite sides of the blues spectrum, but their rhythm is bound by a lush muscularity that is both stunning and yet unrefined, gritty even. Outside Ourselves isn’t merely a new collection of Freightrain songs; it’s a fly-on-the-wall perspective of Robert Parker’s studio process in real time, and it couldn’t be much more thrilling a listen.

Vocals aren’t the primary focus of this record, though they do add a wonderful finishing touch to tracks like “You Found Me,” “Wake Up” and “Better Man.” While in some instances, i.e. “Elijah” and “Wake Up,” it’s easier for the band to stay focused on the textures within their instrumentation as a means of conveying the grander statement in play here, there’s other occasions, like with “Don’t Stop the Music,” where lyrics contribute a certain color to a track that makes the vibration of the music stand out a little more than it would have. There are so many varying degrees of melodicism here that range well beyond the typical lexicon of vocals, guitar and drums, but at the same time there’s never a moment where we feel like we’re being drowned in details and left with nowhere to go. Outside Ourselves is too crisp, too efficiently produced for that to occur.

While all music, at its core, seeks to personify expression in the most fundamental way known to man, it’s much more complicated than it would seem on paper to actually craft a song to be as engaging as anything you’ll find on Outside Ourselves. Parker’s Freightrain project delivers an exceptional performance here, with no one track acting as the centerpiece of this record and each aiding in the creation of a larger, moving narrative that speaks to the very essence of creativity itself. The music is tight, but the ambitions couldn’t be much more gluttonous and out of control. In this scenario, there’s nothing wrong with getting a little greedy – as a result, Outside Ourselves isn’t just a loaded LP with more tenacious tone and rich harmonies than anything else on the market presently, but a rather prophetic release from an artist who has proven himself to be one of the best and brightest in his scene. This is a look into Freightrain’s future, and from where I sit it couldn’t be more enticing.